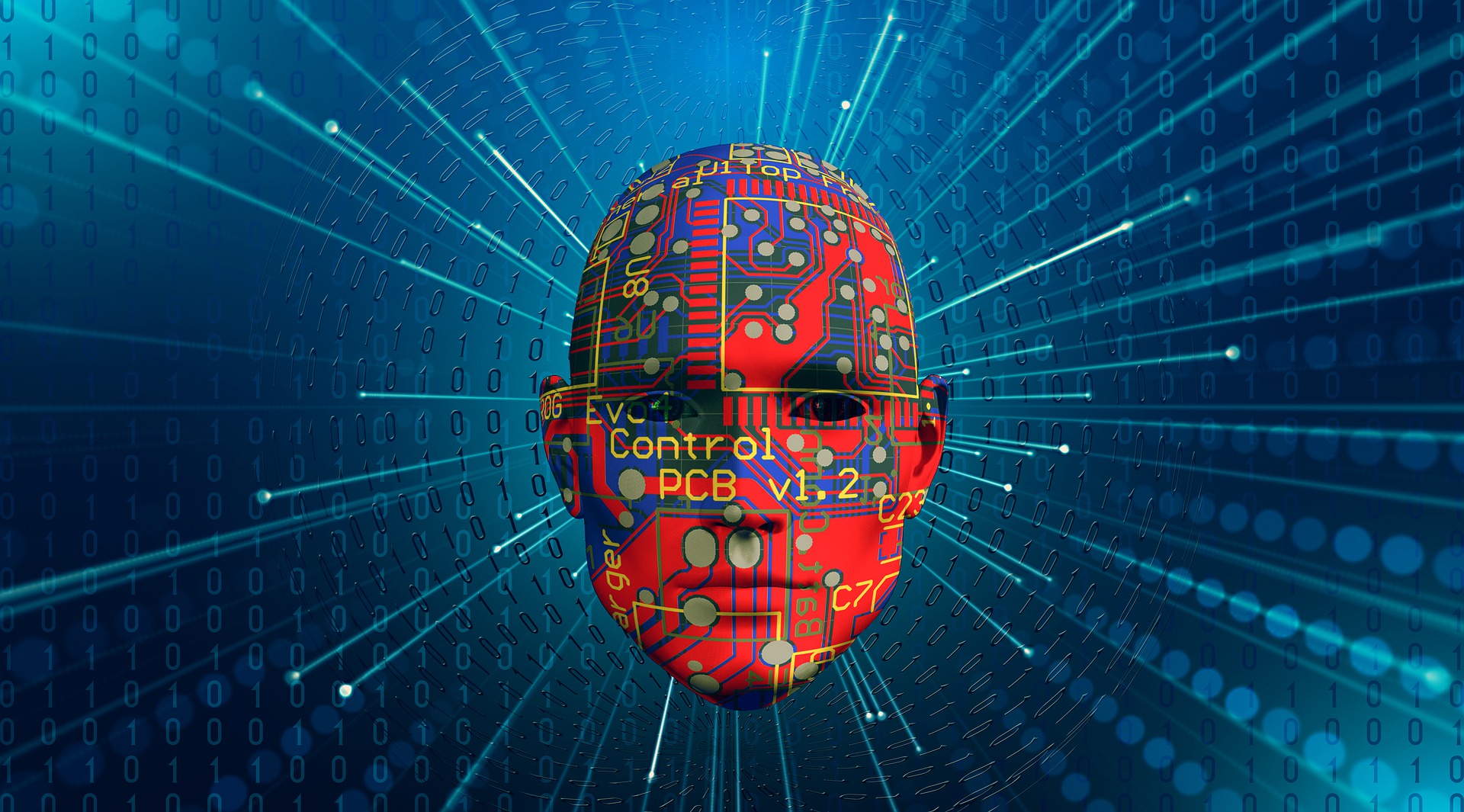 Amit Balooni 0 January 7, 2021 4:37 am
Banks being viewed as a panacea for all ills?
Is Loan a Product? (SME Lending Models 4)
Loan Agreements: A contract between unequals!

A couple of years back I was part of a consulting team reviewing digital initiatives of a bank. This was how the conversation went, in essence

Bank  “We plan to be a digital bank. We have recently launched new version of the mobile App.”

Us ” Is mobile app an extension of your branch or a branch in itself?”

No, our question wasn’t cryptic or condescending. It was to point towards the constraints of what banks consider ‘Digital’. For most banks, it seems to stop mostly at an app and online banking!

In my experience, it is indeed difficult to critique and transform an organisation where everyone seems to have expertise on ‘digital banking’, fluently using all the tech gobbledygook– Blockchain, AI, Machine learning, VR, AR, Neural Networks, Open Banking, mobile App, you name it. (Ok, maybe today Blockchain is out of favour while ‘post-COVID Banking’ is in!)

But then, technology or not, Bankers have been banking experts from times immemorial. And still faltered time and again and again.

Just a decade back, innovation in banking was about ‘Newer Digital Branches’ and ‘Premier corners in the Branches’. It seemed just the right thing to open as many branches and ATMs as possible. Then rapidly, definition of ‘Being Digital’ changed from branch centricity and touch-screens to ‘Digitising’. And this is what it meant: Convert the existing physical process or a paper application to an online form. Make a few Apps.

It helped, of course – fund transfers became app based, balance enquiry real time and in some cases loan applications became online. Also, many RMs started carrying tabs and sales force was getting tracked through GPS! Banks digitised their lending operations with scan-based systems, replicating the paper and file-based credit evaluation process onto a connected Loan Origination System. Much more of similar digitisation happened in the back-end operations.

But conversion of a manual process to digital platforms or even stretching a bit to include process tweaks for improved efficiency, is only tip of the iceberg. You can call it ‘Digitisation’. It helps. But the real game change is ‘Digitalisation’.

Digitalisation= thinking one step ahead

For digitalisation we ask more fundamental questions- Is the process relevant for the customer, at all?  Regulatory entry barriers notwithstanding, how do we make the life of customer easier? What will be called a ‘Bank’ in few years from now?

The follow up questions become deeper and the ensuing changes more transformative. For example- Does the customer need to apply for the loan at all? Do we need to start credit evaluation after the application? Is debt the only way we can fund? Can credit be given on the fly, at the time of purchase? What revenue streams will replace NIM, deposits and remittance fees?

In short, the principle of digitalisation is to question the established linearity of process and move from ‘organisational centricity’ to ‘customer centricity’. P2P lending and Crowd Funding, though still nascent, may just be the two examples of how lending process got upended. Or the way cryptocurrencies almost questioned the very relevance of fiat currencies. Or the way algo-lending platforms seek access to un-conventional data points instead of long forms and document files. Of course, many of the forward ideas do get stuck in regulatory quagmire, but the essence is to build organisational thinking beyond incremental!

Before rushing to the dictionary for digitise and digitalise, it is important that banks realise that this isn’t about the ‘meaning’ but the ‘nuance’. And many times, this nuance between digitise vs digitalise isn’t conspicuous.

For example, Wallets may seem like a simple digital payment channel. A deeper look would reveal that, in reality, they redefined ‘who is a customer’.

For a bank the definition of a ‘customer’ is some who has ‘documents’ , comes to the branch, waits for the account to be activated and then waits further for the cheque book or card to come. For a Wallet, a customer was anyone who downloaded the app!

The pain point they resolved was simple but impactful- two-factor authentication that the ‘digital banks’ required for even the smallest of payments. Add to this simple onboarding. If not for the artificial barrier from regulators, this new customer wouldn’t even need a linked bank account to use a wallet. Some banks took the learning and simplified the 2-factor authentication with biometric. But don’t you wonder why many still prefer Google Pay to Bank Apps!

The moral of the story is, while for a payment service like wallet, everyone who needs to make or receive a payment is a customer, for a bank in their ’digital’ cocoon, ‘customer’ is still the account holder!

While Wallet is old news and old tech now, you can be sure that few banks are still working on it. Just starting, maybe. Nevertheless, all banks must have realised that new domestic payment systems like UPI in India or NPP in Australia, providing 24×7 payments and ability to integrate non-bank players, have democratised payments. Payment processing is no longer a competitive advantage or a significant revenue stream. It also means limited ability to mobilise CASA based on your sales pitch of wide branch or ATM network. Money just keeps floating beyond you.

Banks’ monopoly on accounts and customer information is changing too. Payment Services Directives (PSD2) in Europe, mandated Open APIs, forcing the banks to provide customer account access to other non-banking players.  ‘Bank as a platform’ is a powerful concept and is catching on. Some new age banks have realised its potential.

BBVA Compass, for example, partnered with online SME lending company, OnDeck, to refer customers who do not fit into BBVA’s loan policy. OnDeck gains customers from the BBVA’s platform. BBVA retains customer confidence, whether or not it gives the loan itself. BBVA’s vision is well articulated by Chairman and CEO, Francisco Gonzalez, way back in 2015, “BBVA will be a software company in the future”

Fidor, a German bank, took this a step further by offering ‘Bank as an Operating System’. Fidor is not only a digital bank, but with its FidorOS, it provides a ready to use technology platform for anyone wanting to launch a digital bank with a front-end layer, an API layer, Core banking, data management capabilities and more. Basically, it means anyone can take Fidor’s technology backbone and set up a digital bank.

Digitalisation requires bit of tongue twisting, higher effort, deeper thought and importantly, giving up the convenience of just being ‘digital’. Knowingly or unknowingly many banks do undertake fundamental changes, although most of times these are non-material areas. But more often than not, wannbe digital banks debate semantics and worry about the App. A select few, however, are deliberate in ‘digitalising’, going much beyond digitising existing process. They are re-imagining banking and asking if the old age definitions, processes, information requirements and form-factors are required at all. 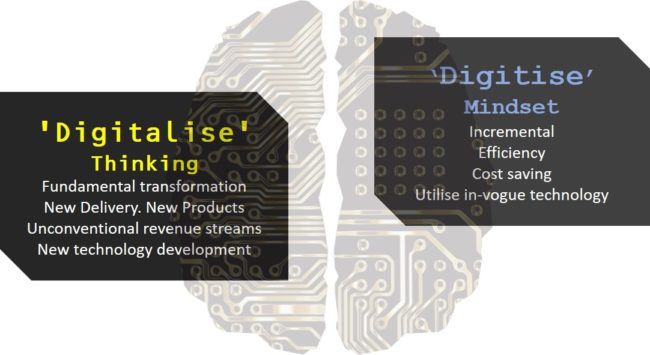 In the post-COVID world, models will be upended but we will still need Banks. In what form is anybody’s guess but this event surely catalyses the transformation. While those with ‘digitise mindset’ will wait, react and try to catch up in 2021, ‘digitalise’ thinkers are anticipating it now and being proactive. Its not the technology that transforms. Its the mindset change that makes a bank digital.

Is your bank still talking ‘digitise’ and excited about WFH, Zoom calls, and Online banking? 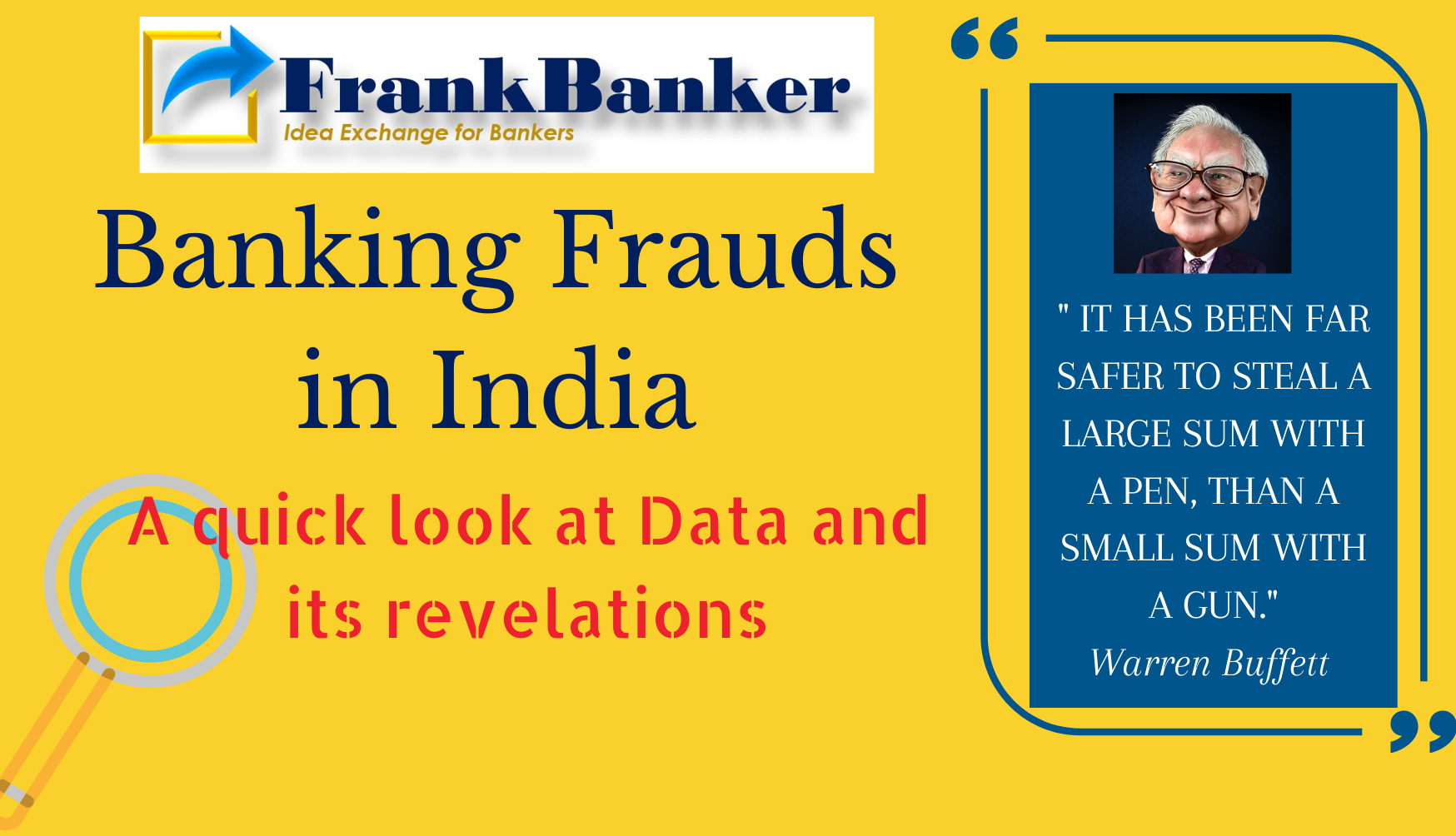 Banking Frauds in India: A look at Data and its revelations